Babia Góra is famous for breathtaking views over Beskidy, Gorce and Tatra mountains, it is a very popular spot to watch the sun rise or set. On the other hand, it is the moodiest mountain in Poland. It’s very windy, which results in very quick weather changes. Its name “Devil’s peak” didn’t come into being without a reason. After a hard meeting with it last Saturday I think it suits it very, very well…
We climbed Babia Góra many times with my fiancé, but we’ve never seen the famous sunrise from its peak. We’re not big fans of waking up in the middle of the night, so we decided to go there to see the sunset, which should be equally impressive. Weather forecasts were perfect. Sun with little clouds, wind blowing 20 km/h with occasional stronger blows. Let’s go!

We arrived at Krowiarki Pass around three hours before sunset. It takes 2h20 to reach the summit with a red trail, so we didn’t have to hurry. The weather was perfect, like in the forecasts.

It wasn’t easy from the very beginning though. In the forest the trail was covered with ice, it was very slippery. We had to take each and every step very carefully. Trekking sticks turned out to be precious!!
After around an hour of careful walk we got out of the forest and it stopped to be so slippery. We saw Babia Góra massif at its best.

Behind us there was an amazing view over Beskidy. You can see the snowy stripe of Mosorny Groń ski slope.
When we passed the lowest peak of this massif, Sokolica, the mountain started showing it’s diabolic nature. The wind got stronger and the clouds were coming and going with an unbelievable speed. Very fast changes from “see” to “no see” 🙂

We caught a glance at Tatra mountains. We had to react fast to catch them on a picture. A few seconds later they were all covered again.

Even though everywhere else the sky remained blue and clear, Devil’s Peak got all covered with “smoke”.

The higher we got, the stronger the wind and the lower the real feel of temperature. Moments of “no see” were getting more frequent than the “see” ones. Eventually we got in a deep mist which didn’t disperse anymore

I accepted long before that we won’t see the sunset after all. But I certainly did not expect that this mountain will kick our arses so hard. Close to the summit the wind was so strong that it was really hard to resist. It blew at our faces or from the side and it was guiding our steps more than we did. I felt like a climber trying to reach Nanga Parbat in the winter. In such conditions we do get much more respectful to the mountains. We also come to understand better why and how do people die in the mountains. It would be enough to add a slippery trail to such wind and even a seemingly not dangerous mountain could get very dangerous. It would be enough if we trusted the weather forecasts and didn’t prepare for a very low temperature and in the best case we would “only” have some frostbites.

Unfortunately, instead of seeing a breathtaking sunset we only saw this: 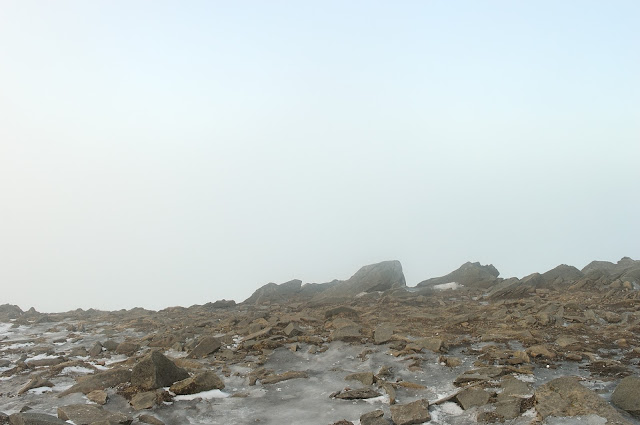 On the summit we were able to rest from the wind behind a small wall made of stones. We warmed up with tea and ran away from there as fast as the conditions let us. We hoped that the lower we get the better the conditions. Indeed, some 200 meters lower it was much warmer and calmer. On Sokolica we even saw a little substitute of sunset…

Devil’s Peak showed us it’s character in all its splendor. It reminded us why we can not underestimate the mountains or approach them with too high level of self-confidence. Why we should always be prepared for the worst weather conditions, despite the forecasts. It proved us that it shows its most beautiful views only when it wants to, not when we plan to see them. Fair enough, Devil. Everyone could use this kind of respect lesson once in a while.

Check also how I underestimated another peak belonging to the Crown of Polish Mountains – Wysoka in Pieniny mountain range. And if you wonder why to do this to yourself and torture yourself in the mountains – check how mountains help me get my priorities right and can help you too! 🙂

5 thoughts on “Devil’s Peak teaches respect. How we did not see the sunset on Babia mountain.”

Your Perfect Itinerary For Two Days In Lisbon, Portugal